Aprons Drying on a Brick Wall 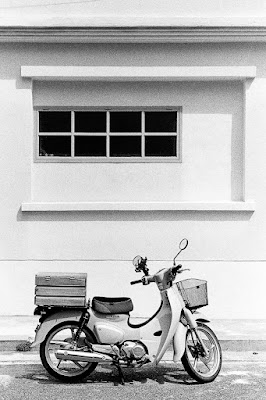 I'd love to ride a scooter like this. Alas, the streets are a bit too mental and the missus has forbidden it anyway.

Cat on a Leash 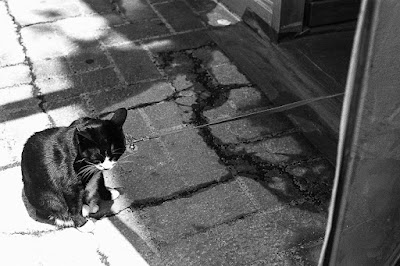 Down by the cable-ferry wharf is a beauty salon that has two cats. There is a silver cat and this black and white cat. The owner keeps them on leashes so they don't wander off. The leashes are fairly long but don't extend far outside the door. She also puts a dot of pink makeup on either side of this cat's nose. The cat probably doesn't care, but I can't help feeling embarrassed for it.

How much needs to be known about this photograph beyond the thousand words it's worth? Does knowing the film, the aperture, and the shutter speed add any value? Is it important to know in which harbour I photographed this boat?
I'm asking these questions out of a sense of laziness.  I would like all the answers to be 'nothing' and 'no'. Now and then I get a burst of organising energy and add keywords, titles, and captions to my photographs. But that energy doesn't last long and I'm back to only adding a title to each photo's filename to identify it. The photo above is '20220721-002-026 boat in gaetbae wharf.jpg'. The location is just a guess based on other photos on the roll. I should probably just call it 'rope on fishing boat'. That would be enough information for a computer search.
I wonder how other people label their photos. Especially film photographs. Do you write notes on the film sleeve or contact sheet? Or organise the rolls of film by location and event?
- August 08, 2022 2 comments:

I recently spent three days in Seoul and learned some things about cameras I have and cameras I don't have. I brought my Fujifilm X-T4 with me and realised that it was the wrong choice for the trip and often left me feeling frustrated. I visited a number of camera shops to see if there was anything better I could travel with, but it became obvious that a good alternative is not easy to find.

I like the colours I get from the X-T4, but I find the camera awkward to use. So many buttons and dials and it seems like I have to pressing and turning them all the time instead of just taking pictures. I don't have that experience with my much simpler Nikon cameras. In addition to the camera being complicated to use, I can't seem to trust the autofocus system. And I've read that other people also have that problem. I often have to chimp to make sure a photo is in focus, especially in low light. The third thing that annoyed me about the camera was the EVF (I don't like EVFs from any company, not just Fuji) and the playback quality. It's hard to tell sometimes if a photo is sharp or not until I see it on the computer later. These faults could all be user incompetence because the X-T4 is a highly-regarded camera. But I just can't seem to get used to it. So I decided to sell it sometime in the near future.

What I do like very much about the X-T4 is the size, weight, and compact primes available for it. So I went to a number of camera shops in Namdaemun Market to look for something that might replace it. Maybe a small DSLR? Something else that doesn't use an EVF?

Leica and Hasselblad are nice but way out of my price range. Anyway, there weren't too many Leicas in the shops I visited. There were plenty of DSLRs, but unless you get something like a Nikon D3500 with its tiny viewfinder, there isn't much that's smaller than my D850. I looked at film cameras, but the selection was either junk or ridiculously priced things like the Contax G2. Everything in between seems to have been bought up my collectors. Or someone.

Namdaemun Market was disappointing, so I took a taxi to the Chungmu-ro neighbourhood. There are some second-hand camera stores there as well as some very good places that sell new products. I first went to Saeki Camera to have a look at the Ricoh GRIIIx. Surprisingly, they had quite a few of them. They are nearly impossible to find in online shops. Ah, I know why. Saeki is an official Pentax/Ricoh retailer. As well as Zeiss, Billingham, and some other good brands. Anyway, the GRIIIx is small and has a good sensor, but there is no viewfinder unless you buy an optical viewfinder to put in the hot-shoe. And there are a lot of buttons. And I didn't really enjoy using the camera. While I was there, I had a nice conversation with one of the salespeople who asked me if I had ever tried using Zeiss lenses on it with an adapter (he's in charge of the Zeiss line). I hadn't. He showed me the Pentax cameras they have and we talked about DSLR vs mirrorless. A very helpful, friendly, and knowledgeable guy. If I ever do buy a Pentax, I'll go buy it from him.
My next stop was the Nikon store about 50 metres away. No DSLRs on display except for a D5xxx (can't remember the remaining numbers), though they did have quite a few F-mount lenses. I played around with the Zfc, the Z50, and the Z7II. The Zfc has a nice look, but a lot of controls and a lot of things that need to be done on the rear touch screen. The Z50 was kind of the same, but with a less cluttered body. The Z7II is very nice, but the EVF wasn't much better than the X-T4's. The Nikon Z-series FX camera bodies are small, but the lenses are huge, even the primes.  I think my D850 + lens might be lighter! So I left the store and gave up on my search.
What I concluded from my camera store visits is that the X-T4 is about as good as it gets for a camera that's easy to carry around while travelling. There's a good balance between size and image quality. But I'm very probably going to sell it soon. It's a great camera, but it's not for me. I can't get used to the controls and I can't get used to an EVF. And I don't like not being able to completely trust the AF. It also became plain that there is no camera I want to buy to replace it. I'll either have to get an iPhone with three lenses to replace my ageing 6s, or gird up my loins and carry around the D850, the F6, or the F100 when I travel. They're not light or small, but I can trust them to get high quality photos without any fuss.
- August 05, 2022 4 comments:

Sometimes I wonder if it was possible decades ago to knock up a building without the involvement of an architect. I don't want to live or work in this sort of structure, but it's interesting to photograph.
- August 01, 2022 2 comments: 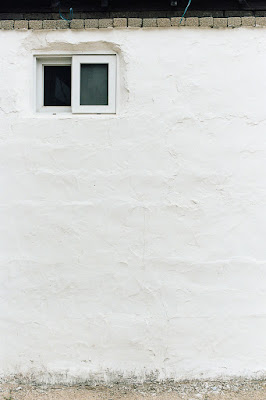